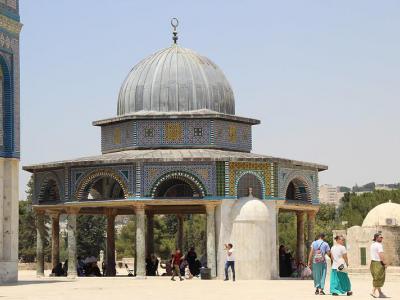 Adjacently east of the Dome of the Rock, at the very center of the Temple Mount compound, the 7th-century Dome of the Chain (Arabic: Qubbat al-Silsila). While its original purpose is so far unknown, the name derives from a legend that, during King Solomon's time, a chain hanged from its roof, and if two men approached it to solve a point of litigation, only the honest and upright man could take hold of it; the unjust man saw it move out of his reach. In Islamic tradition, it is the spot where Judgment Day will occur in the "end of days" and where a chain will stop the sinful and let the just pass through.

The inside of the dome displays delicate blue and white tilework from the Ottoman period (16th century) and the mihrab (or prayer niche) in the structure's single wall is typically Mamluk, with lots of stripey ablaq, including the almost flame-like triple-colored arch which surmounts it.
Image Courtesy of Flickr and Gary Todd.