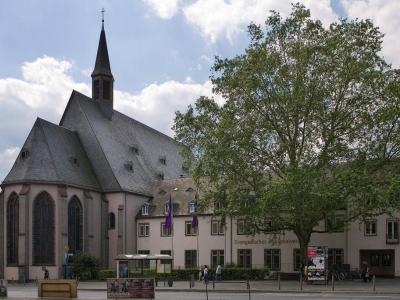 The Dominican Monastery in Frankfurt was the earliest church and Christian monastery in the city. Today, it serves as an exhibition hall and meeting place and is the seat of the Protestant Evangelical Association consisting of Evangelical Churches and Deaneries in the region. The Synod of the Evangelical Church in Hessen and Nassau is convened here, twice every year.

The monastery established in 1233 had humble beginnings. The first Dominican brothers built a small house with four rooms and set about their task of providing religious instruction to the local people. This small house served as the entrance to the monastery. In the 14th century the monastery consisted of many scholars and received generous donations from citizens in appreciation of the good work performed by the monks and a richly decorated monastery and chapel were constructed. The building was taken over by the Lutherans after the reformation. The city obtained the monastery during the secularization period and put it to several non religious uses.

The design of the monastery was Gothic and the structure was made of rubble stone. It was almost completely destroyed after the Second World War. After the war, architect Gustav Scheinpflug designed a new structure based on the layout of the old monastery. The new structure has a Gothic style with modern interiors. Of the old building, only the choir of the Holy Ghost Church remains. The courtyard of the monastery plays host to a folk theater performance every summer and concerts by the Church Music Association Frankfurt.
Image by Flibbertigibbet on Wikimedia under Creative Commons License.
Sight description based on wikipedia