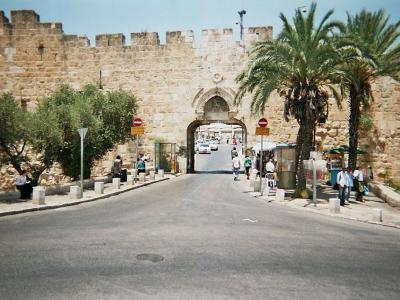 The Dung Gate is one of the gates in the walls of the Old City of Jerusalem built in the 16th century, situated near the southeast corner of the Old City, southwest of the Temple Mount. The ignominious “dung” word refers to the original Hebrew name – Sha'ar Ha'ashpot – which is more discreet and translates literally as the “Gate of Garbage” or “Ash Pot Gate” in a sense that when the First Jewish Temple was still in place, all the garbage and ash from sacrifices were flung out through this gate into the Valley of Hinnom to be burned.

That ancient "Dung Gate" however may not have been the same as the one built in the 16th century, which only got its name in the 19th century. The 16th-century gate was much smaller than it is today, more like a wicket, and was enlarged in 1952 under the Jordanians who took control over the Old City in 1948. After the Israelis captured it in 1967, they renovated the gate further.

The benefit of the Dung Gate is its proximity/convenient access to the Western Wall (entrance to the Western Wall Plaza is directly behind the gate), as well as to the City of David (and Hezekiah's Tunnel), as it serves as the main passage for vehicles coming out of the Old City and for buses heading to the Western Wall.
Image by Djampa on Wikimedia under Creative Commons License.
Sight description based on wikipedia