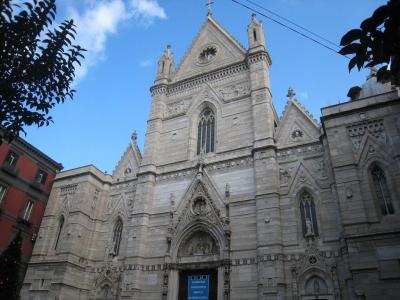 Naples Cathedral is also known as The Cathedral of the Assumption of Mary. The church is commonly called Cattedrale di San Gennaro in honor of Saint Januarius.

The construction of the cathedral began in the 13th century and was finally completed in the 14th century. The impressive Gothic cathedral was built on the ruins of previous churches' excavations. Over the years, Greek and Roman artifacts have been found underneath the cathedral.

The neo-Gothic facade wasn't completed until 1905. The interior features a gilded coffered ceiling. Artist Luca Giordano completed the baroque sections of the nave and transept.

Priest and architect Francesco Grimaldi designed the Chapel of the Treasury. Several renowned artists worked on the chapel, which was completed in 1646. Jusepe de Ribera created the stunning St Gennaro Escaping the Furnace Unscathed canvas. Giovanni Lanfranco created the magnificent dome fresco. Behind the altar, Saint Januarius's skull and two vials of blood are held in a silver strongbox.

The next chapel contains Saint Januarius's bones in an urn. More of the saint's remains are housed below the altar in the Cappella Carafa chapel.

Visitors will be impressed by the Basilica di Santa Restituta, originally built in the 4th century and renovated in the 17th century. This ancient church holds Europe's oldest baptistry, the Battistero di San Giovanni in Fonte. The baptistry is decorated with 4th-century mosaics.

A vial of blood belonging to revered Saint Januarius is brought out three times a year, and the dried blood usually liquefies. Legend says that when the blood doesn't liquefy, disaster will come to Naples.

This stunning medieval cathedral holds the miraculous blood of Saint Januarius, priceless artworks, and an early Christian basilica dating to the 4th century. It's a beautiful place to view Italian art and architecture and appreciate Naples' religious culture.

The church is closed in the afternoon. Visit between 8:00 am and 12:30 pm, or 4:30 pm and 7:00 pm. The main cathedral is free to enter, but the baptistery charges a small fee.
Image Courtesy of Wikimedia and Avemundi.