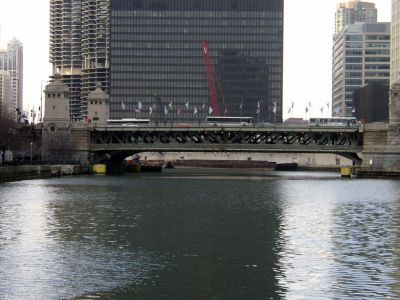 Jean Baptiste Pointe du Sable, commonly regarded as the "Father of Chicago," was thought to be a native of the French colony Saint Dominique in the Caribbean. He is credited with being the first settler in the area of Chicago. His name is on schools, a museum, a park, and the DuSable Bridge spanning the Chicago River.

The bascule-style bridge was erected in 1928. It was part of a plan to link the south and north side parks of Chicago with Grand Boulevard. On the north, it connects with the 1780s homestead site of Jean Baptiste du Sable. The south side ends at the early 19th-century location of Fort Dearborn.

Also called the Michigan Avenue Bridge, the DuSable Bridge is a double-leaf, double deck, fixed counterweight, trunnion bascule bridge. It has a roadway on both levels. Edward H. Bennett was the consulting architect of the project, and William A. Mulcahy was the chief engineer.

Sculptures in the bridge tender houses by artist Henry Hering depict Discoverers, Pioneers, the 1812 Battle of Fort Dearborn, and Regeneration after the Great Fire of Chicago. The bridge also has 28 flagpoles for flags of the United States, Illinois, and Chicago and other banners as needed.
Image Courtesy of Wikimedia and Knowledge Seeker.