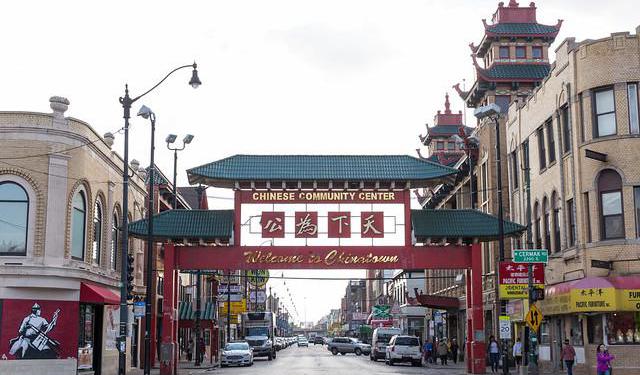 Tucked away just south of the Loop, the Chinatown of Chicago was established in 1912 and is considered one of the best examples of American Chinatown. While it may be one of Chicago’s smallest neighborhoods geographically, it is big on character, colors, sights, sounds, and flavors. Here, you’ll find a wide range of unique boutiques, specialty shops, religious sights, authentic Chinese restaurants and medicine stores.

Start at the Chinatown Gate over Wentworth at Cermak Road – one of the neighborhood’s most emblematic streets since long. Visit the Pui Tak building, designated a Chicago Landmark in 1993, informally known as Chinatown’s “City Hall”, then learn about the settlement’s history at the interesting Chinese-American Museum, which shares the story of Chinese Americans through their own eyes and words. Besides an excellent film explaining early immigration to Chicago, there are dozens of artifacts and documents to browse through.

On the northeast corner of Cermak and Wentworth, you’ll find the Nine Dragon Wall – a reproduction of the 15th-century mural of the same name in Beijing. Each of the nine dragons brings a special kind of prosperity luck for the present and future!

Chinatown Square is a newer area as compared to the main strip or Wentworth Ave. An outdoor mall of sorts, it is filled with restaurants, retail, a bank, beauty shops, and offices – though you might also get to see traditional festivals during certain times of the year. Scrolling along further away, the Ping Tom Memorial Park awaits you on the riverfront.

Follow this self-guided walking tour to discover one of North America’s largest and most vibrant Chinese communities!
Image Courtesy of Flickr and Mack Male.
How it works: Download the app "GPSmyCity: Walks in 1K+ Cities" from iTunes App Store or Google Play to your mobile phone or tablet. The app turns your mobile device into a personal tour guide and its built-in GPS navigation functions guide you from one tour stop to next. The app works offline, so no data plan is needed when traveling abroad.

Chinatown Gate is one the most prominent landmarks to be seen in Chicago's Chinatown. The gate marks the entrance to the Chinatown and was installed in 1975. It was designed by architect Peter Fung based on a gate in Beijing. The hand-painted characters on the ornamental tiles at the top of the gate translate as “The world belongs to the commonwealth”, a saying dating back to the early part of the 20th century when China was transitioning into a republic.

The gate stands on South Wentworth Avenue, the main boulevard of the Chinatown. On this street you will find numerous restaurants, bakeries, grocery stores, and Chinese medicine shops. In addition to the abundant Chinese restaurants in the area, there are also lots of eateries serving Vietnamese, Thai and Japanese cuisine.

Later, the building was purchased by the Chinese Christian Union Church (CCUC) and renamed Pui Tak Center in 1993. The Center now hosts various religious, community and educational programs, such as adult education and training, youth programs, music programs and new immigrant services. The Pui Tak Center is a historical landmark of the Chinatown. The name “Pui Tak” is the Chinese for “building character” or “cultivating virtue.”

Image Courtesy of Flickr and Marit & Toomas Hinnosaar.
Sight description based on Wikipedia.
3

St. Therese Church was founded in 1963. It is considered one of the most beautiful churches in Chicago’s Archdiocese. Renowned for its architecture, the building features remarkable interior with statues and stained glass windows suggesting Italian roots, although with prominent Chinese influences as well. The parish’s main statement, located on the keystone above the altar, is written in Chinese.
Image Courtesy of Flickr and Mark Susina.
4

The Chinese-American Museum of Chicago opened in 2005, whereas the building itself dates back to 1896. The museum is a non-profit corporation aimed at promoting – through exhibitions – education and research relating to the Chinese-American culture and history in the Midwestern United States.

Founded in 1903, the Chinese Christian Union Church is housed in the building constructed in 1950 and, for years, has been Chinatown's most important religious and social venue. The church's exterior features Asian style with beautiful brickwork. Services are held in English, Cantonese and Mandarin.
Image Courtesy of Wikimedia and hakkun.
6

The Nine Dragon Wall was built in 2004 and soon proved to be one of the key landmarks of Chicago's Chinatown. This Wall is one of the four replicas of the Beijing original found in the world. It is made of glazed tiles delivered from China, and features one large and over 500 smaller dragons painted in red, gold and blue, signifying good fortune.
Image Courtesy of Wikimedia and Peter.m.ng.
7

Chinatown Square is a two-story outdoor mall replete with restaurants, retail stores, boutiques, banks, clinics, beauty shops, and a handful of offices. This is the largest Chinese mall in the US east of San Francisco and west of New York City.

Statues representing twelve Chinese zodiac animals grace the three sides of the square. These works of art were commissioned to the Xiamen University Art Department in Xiamen, Fujian, China. Other landmarks within the mall include twin pagodas. The mall opened in 1993 and has since been a busy place frequented by locals and visitors alike for cultural performances and celebrations.
Image Courtesy of Flickr and Paul Sableman.
8

Ping Tom Memorial Park is a public urban park in Chicago's Chinatown. Located on the south bank of the Chicago River, it is divided into three sections by Santa Fe rail track and 18th Street, and features a pagoda-style pavilion, bamboo gardens and a playground.

The park is named after the prominent Chinatown's businessman and civic leader, Ping Tom, whose bronze bust is installed near the park's pavilion. The park's original design called for walled plazas inspired by traditional Chinese gardens in Suzhou, China. A pagoda-style pavilion based on a structure that Wong had seen in Suzhou is located near the park's eastern boundary—the Chicago River. The park's entrance is marked by four 20-feet-tall columns, each etched with Chinese dragons, and is modeled after a traditional Chinese courtyard.

Tom Ping Park is a hidden gem of Chicago. It is beautiful in all seasons and provides a great vista to view the skyline from the south. Be sure to bring your camera with you because the place is quite picturesque and it would be a shame not to capture it!
Image Courtesy of Wikimedia and Torsodog.
Sight description based on Wikipedia.