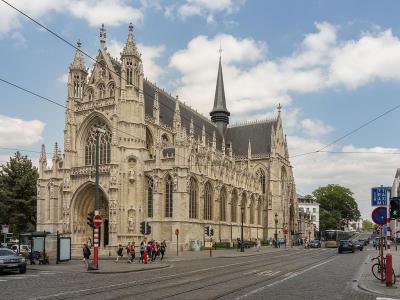 The Église Notre Dame du Sablon (Church of Our Lady of the Sablon) is a late-Gothic style church in the upscale Sablon area. The original chapel on the site dates back to 1304 and was funded by the Guild of Crossbowmen. Upon completion of the chapel, the guilds-men used it as their place of worship. Later, the church was used by the monarchs; including Emperor Charles V. Up until the late 1700s the church was a burial ground for the rich community members, who would construct their own funeral chapels.

The church was expanded through the years and was renovated in a neo-Gothic style between 1864 and 1934. The real beauty of the church is in the interior, with impressive and colorful stained-glass windows. These windows provide a contrast to the churches generally gray and white features. They are lit from behind and visible from the exterior of the church at night. The statue of St. Hubert is notable due to its interesting history. It was stolen from Brussels and spirited away to Antwerp where it stayed for a year. Eventually, it was returned to the church and in 1348, and it has remained ever since. The church is open daily.

Why You Should Visit:
To be struck by the sense of how grand the structure is, yet at the same time by its intimacy as compared to a more typical cathedral.
Well lighted by MANY beautiful stained glass windows – amongst the most memorable you will see!

Tip:
Make sure to go early on a Sunday so you can also go to the antique market outside the church!