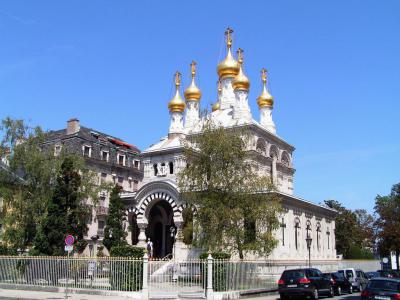 The Eglise Russe (Russian Church), otherwise known as the Cathedral of the Exaltation of the Holy Cross, is a historic Russian Orthodox temple in Geneva attached to a parish established on the orders of Emperor Alexander I in 1817. The temple was built in 1866, funded with generous donations by the Russian Grand Duchess Anna Fyodorovna, who lived in Switzerland at that time after separating from her husband, Grand Duke Constantine, as well as other members of the Imperial family of Alexander II (Michael, Olga, Constantine, Helena, Mary and Nicholas of Leuchtenberg), plus the Metropolitan of Kiev, Arsenius Moskvin.

The emergence of this church became possible after the revolution of 1846, following which the Geneva Constitution of 1847 guaranteed freedom of worship to various religious communities within the city. Among them was a small Russian diaspora comprising diplomats, military officers, aristocrats, engineers, civil servants, tourists, students and even left-wing activists. The building features Byzantine design, topped with nine bright golden onion domes and striped arches: five above the nave (symbolizing Jesus Christ and the four Evangelists), three on the apses, and one on the bell tower. Their total number represents the hierarchy of angels, composed of nine choirs.

The construction was carried out by Geneva-based architect, Jean-Pierre Guillebaud, to the design made by professor of architecture at the Imperial Academy of Fine Arts in Saint Petersburg, David Grimm. The foundation stone was laid on September 26, 1863 in the presence of Princes Serge and Georges de Leuchtenberg, the Russian Ambassador to Switzerland, as well as the State Councilor, Moïse Vautier. After three years of work, the church was completed on September 14, 1866 and was consecrated on September 26 of the same year by the Archpriests Joseph Vasiliev of Paris, Vassili Polejaiev of Nice, and Athanase Pétroff.

The Russian Church remains in active use to date, with the services held in Russian, Bulgarian, Serbian, and other languages.
Image by Romano1246 on Wikimedia under Creative Commons License.