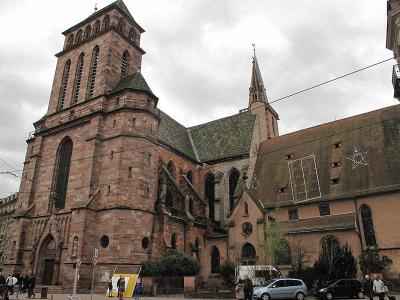 Saint Pierre-le-Vieux Church is the oldest church in Strasbourg and it is certainly worth a visit.

Although the first mention of the church was documented in 1130, there are several vestiges from a much older church dating back to somewhere between the 4th and the 8th centuries. According to legend, this early church was built by Saint Maternus.

The church you can visit today was built in 1382 and it has the particularity of being both Catholic and Protestant. From 1382 to 1529 it belonged to the Catholic congregation of the city. In 1529 it was handed over to the Lutherans, before becoming the first double-religion church in France in 1638.

In 1867, due to the growing Catholic congregation, the architect Courath was commissioned to build an extension perpendicular to the original building. In 1912 two of the bays were demolished to make room for the new Rue de 22 Novembre. At this time a new facade and a bell tower were added.

Inside the church, you can admire the ancient rood-screen and against the wall separating the two faiths, you will see 4 reredos dating back to the 15th century. Fitted into the woodwork on the wall of the quire are 10 panels representing the Passion of Christ executed in 1488 by Hénri Lutzelmann.

Why You Should Visit:
Interesting architectural design and you can regularly listen to organ recitals that give life to the building.