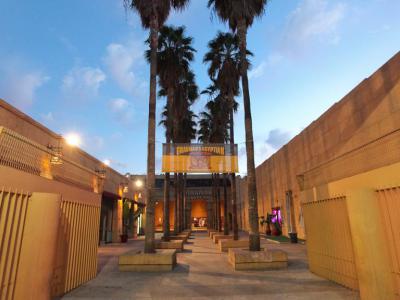 Sid Grauman and Charles Toberman collaborated on creating three theme theaters, of which the best one, perhaps, – if not the most famous – is the Egyptian Theatre.

The latter was built during the great interest in all things Egyptian sparked off by the English archaeologist Howard Carter and his excavations in the Valley of the Kings; hence the building's Egyptian Revival facade, Egyptian paintings and hieroglyphs on the interior and exterior walls. Complementing these are four huge columns erected in front of the entrance and a fountain and palm trees set in the forecourt.

The theater opened its doors for the first time in October 1922, just two weeks before Howard Carter found Tutankhamen’s tomb. The film “Robin Hood”, staring Hollywood idol Douglas Fairbanks, had its premiere here – the only picture house where you could see the movie for over a year. This insured a full house every day which helped to repay the massive investment Grauman and Toberman had put into its construction.

During the 1980s and 90s the theater fell into disrepair and was threatened with demolition. Luckily, Los Angeles was going through a period in which they preferred to restore historic buildings, given the funds. The theater was thus sold to American Cinematheque, a non profit-making cultural organization, for the symbolic sum of $1, on the condition that they would restore the building.

Today you can see here a daily screening of “Forever Hollywood,” an hour-long interesting documentary explaining the history of Hollywood, showing interviews with several famous actors telling about their love for the film industry and Hollywood in particular. Throughout the year, American Cinematheque organizes events, such as film, television and video festivals that are very popular.

A lot of films have their premiere at the Egyptian Theatre and sometimes the star and/or director of a film will host the screenings and discuss their work. There are two screens and sliding walls open to reveal the old theater before closing to create a hi-tech cinema.
Image by Tim Wang on Flickr under Creative Commons License.