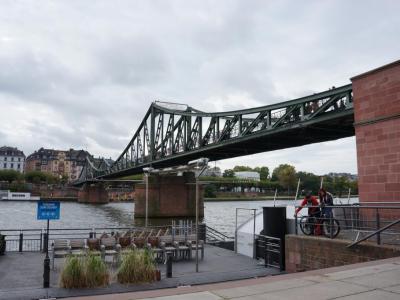 Eiserner Steg (Iron Bridge) is a pedestrian bridge over the river Main connecting the Old Town of Frankfurt with the Sachsenhausen district. It is also known as the “Love Lock Bridge” for being hung with tons of locks interlinked with each other, forming an enormous chain, symbol of "eternal love".

The bridge has been in place since 1868, and was built initially through public subscription. The original version was replaced in 1912 with a widened, reinforced and elevated construction. By that time the Main had become navigable upstream, so the low headroom of the Iron Bridge presented a traffic obstacle for large barges. Although its external appearance was retained for historical reasons, structurally – in terms of the load-bearing principle – the bridge was made completely different, switching from a suspension to a cantilever model.

After World War II, the Eiserne Steg was one of the first bridges in Germany to be rebuilt – in 1946 – after it had been blown up by the Wehrmacht in the last days of the war. In 1993, it underwent a complete renovation, prompted by decades-long corrosion gnawing at the steel, following which two elevators and prams were also added to ease access for wheelchairs. The bridge now has a clearance height of 6.50 m.

The Greek motto, a quote from Homer's Odyssey: ΠΛΕΩΝ ΕΠΙ ΟΙΝΟΠΑ ΠΟΝΤΟΝ ΕΠ ΑΛΛΟΘΡΟΟΥΣ ΑΝΘΡΩΠΟΥΣ (“Sailing on the dark sea to people of another tongue”), spanning the steel construction over the northern pillar, was created by artist Hagen Bonifer in 1999 to celebrate the year of Goethe.

Tip:
If you're into photography, come here at sunset and you'll be able to take some very nice shots of Frankfurt's skyline (but be ready for a crowd).
Image by zunyang on Flickr under Creative Commons License.
Sight description based on wikipedia