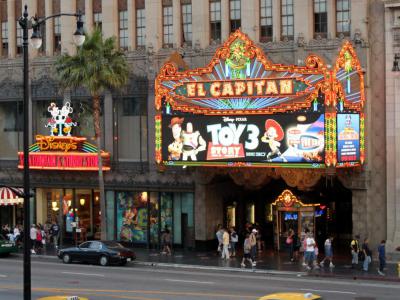 If you want to give your children – or yourself, for that matter – a great deal of cultural treat while in Los Angeles, the best place to go to is the El Capitan Theatre on Hollywood Boulevard.

This movie theater was commissioned by Charles Toberman in collaboration with Sid Grauman, a showman who had previously worked on two other theme theaters. Opened in 1926 as a live theater, El Capitan boasted a Spanish Colonial Revival exterior and a beautiful Eastern Indian red and gold interior. For more than ten years afterwards, some of the greatest artists of the time had performed here, including Clark Gable and Will Rogers.

Towards the end of the 1930s, audiences fell off and in 1941, after Orson Wells had used the place for the premier of his controversial film “Citizen Kane”, the theater closed for over a year. It reopened in 1942 as a movie house, called Hollywood Paramount, remodeled in Art Moderne and completely devoid of Sid Grauman’s original decor.

In the late 1980s the Walt Disney Company bought the theater and restored it to its original 1926 appearance, complete with a magnificent Wurlitzer organ and hi-tech special effect equipment installed.

Before enjoying one of Disney’s great films, your kids will absolutely love the show on the stage in front of the screen, featuring characters from the film they are about to see. The children will be transfixed which is a great change from having them fidget through long boring advertising spots.
Image by Prayitno on Wikimedia under Creative Commons License.