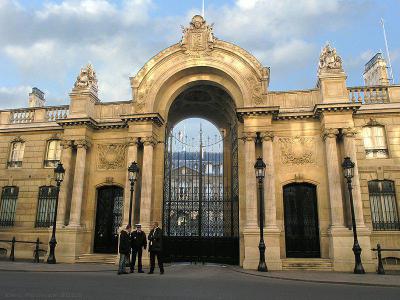 The Élysée Palace is undoubtedly one of the most emblematic properties of the French capital, situated just a few steps away from the Madeleine church, not far from Champs Elysées. Situated on Rue Saint-Honoré, one of the most prominent streets of Paris, it was constructed in the early 18th century and was initially owned by the Count of Evreux.

Lavishly enlarged and repainted during the Second Empire in the fashionable style of that period, the palace has retained much of its original appearance dating back to the days of its first owner. The distinguishable, vast grounds allowed the architect Armand-Claude Mollet to give it something of an air of a small castle. Later, one of the most influential French architectural theorists Jacques-Francois Blondel described the palace as having the “air of magnificence” and being “the most beautiful mansion in the Paris region”.

Having changed hands several times, the palace finally became residence of a French President in 1873. The actual office of the head of state, the Gold Room, has changed very little since. The terrestrial globe, a significant element of the interior, was brought in by Charles de Gaulle. Today, the French Government holds regular meetings at the palace. In the underground section, there is a room with the red button pushing which the President of France can activate the country's nuclear arsenal. The room is also fitted with large screens and communication module linking the President directly to the Minister of Defense and strategic air force commander.

It so happens that presently, with the exception of the European Heritage Days, it is almost impossible for ordinary people to get into the palace. Still, it is well worth the while to view it from the outside. So, whenever you're in Paris, just make sure to walk by.
Image by Eric Pouhier on Wikimedia under Creative Commons License.