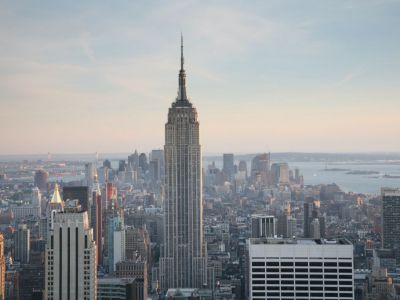 For 40 years, the Empire State Building had been the tallest building in the world until 1972 when it lost the title to the World Trade Towers. After the September 11th, 2001 attack on the WTC, it became the tallest structure in New York City once again.

The building was designed by William Frederick Lamb of the Shreve, Lamb and Harmon architectural firm. It has a simple art deco style typical of the high rise structures in pre-World War II New York. The simplicity was dictated by budget constraints, the time limit for construction and the city zoning laws. 3400 workers were involved in the project, including immigrant European workers and Mohawk metal workers from reserves in Canada. It was completed in one year and 45 days. Upon its inauguration in 1931, the building was declared one of the seven wonders of the modern world by the American Society of Civil Engineers.

Empire State building has 102 floors and stands 1,250 feet high. An iconic part of the New York City skyline, it has been a designated Historic Landmark since 1986.

Why You Should Visit:
The views on a clear day or evening are breathtaking. If you aren't afraid of heights, you should definitely buy a ticket to the 86th-floor observatory or the 102nd floor (for a little extra) to get a spectacular 360-degree view that is centrally located. It's an open deck, so great for pictures, and with binoculars (mounted there) you can look at places around!

Tip:
Check the weather forecast before you visit. If it's not a clear day, DO NOT GO.