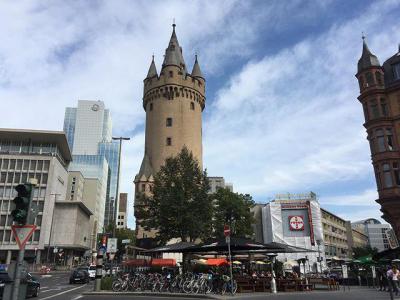 One of the few remaining medieval towers that once protected the city of Frankfurt, the Eschenheimer Tower is a well-known city landmark. It is now located at the center of one of Frankfurt’s busiest intersections.

At the time of completion, the Eschenheimer was one of 60 towers that protected the city of Frankfurt from its enemies. Klaus Mengos, a carpenter, built the tower’s rectangular-shaped base in 1400 and the design was executed and completed by master builder Madern Gerthener. A self-portrait bust of Gerthener is placed on its archway. The tower became functional in 1428. In the 18th century, the city began to expand and many medieval towers were demolished. The timely intervention of French ambassador Count d’Hedouville helped prevent the demolition of the Eschenheimer Tower and to preserve this fine example of medieval architecture till the 21st century. The tower is 47 meters high with eight levels and two attics.

The Eschenheimer Tower is located one block north of the Hauptwache. A bistro called E.T. im Trum is located at the ground floor serving classic German food and beer. Visitors can also view the tower’s well-preserved battlements.

Why You Should Visit:
This tower is EXTREMELY German, has a friendly easy-going feel to it, and just begs to be photographed.
Inside it is comfortable, but there's a large covered outdoor patio, and if the weather is good, that's a nice option.

Tip:
Alternately, go to the top of Fleming's Hotel nearby for a drink and a nice view.