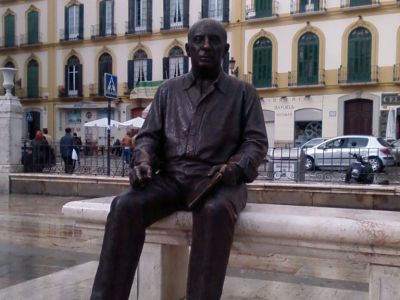 The sculpture Portrait of the Painter Pablo Picasso is a bronze statue depicting the artist seated on a marble bench, with a notebook and a pencil in hands. Almost life-size (the sculptured figure is a bit bigger than Picasso's real stature), this monument was created by Francisco López Hernández and inaugurated on December 5, 2008.

It is located just a few steps away from Picasso's birthplace, Casa Natal, at 15 Plaza de la Merced, which now a museum and a home to the headquarters of the Picasso Foundation.

Ever since its installation, the statue of Pablo has been involved in numerous performances held in the square, such as the White Night, running since 2009, during which, depending on the theme, it is decorated in one way or another.

In April 2013, a group of vandals attempted to steal the statue. However, because of its heavy weight, they could not take it very far and left it on a nearby bench.

Presently, the bronze Picasso is back in his place, leaving sufficient space on the bench to sit next to him and have a little chitchat, or take a memorable photo.
Image by Miwipedia on Wikimedia under Creative Commons License.