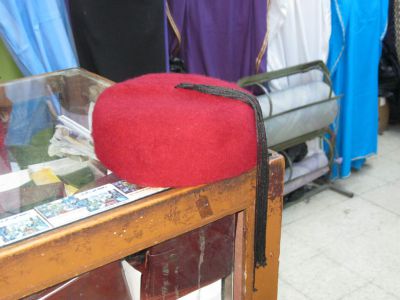 What to buy here: The Chechia.

The Chechia is the close-fitting traditional red skull cap worn in Tunisia. The history of the Chechia in Tunisia dates back five hundred years, to the time when Andalusian Arabs arrived from Spain. A cousin of the European beret, the head piece comes in several types and colours, but only the Tunisian Chechia is red in color.

The tourists, who see the “Chechia” as an excellent exotic ornament where they bring it back as souvenirs, hardly imagine the amount of hard work that is involved in making it or at least the way it was carried out by the code of practice and or by its quality. The beautiful “Chechia” is made of worsted, knitted wool made by women who make the bonnets "kabbous". These bonnets are sent to pressing, they sink it in hot water and soap and the men press them with their feet for a long time, in order to soften them, to a point that the stitches of knitting will disappear.

More and more of young people rediscover the red woolen traditional hat that was at one time worn by all Tunisian men but certain “Chechia” are even designed currently for women who wear them at the evening occasions. Now it is more used as accessory during occasional holidays.

Made by highly skilled craftsman, the “Chechia” occupies three whole sections of the local market of “Madina” in Tunis; Among the various souks in the medina of Tunis, the" Ech-Chaouachine" souks, or Bazaars, have the particularity to specialize in a typical Tunisian handicrafts, since it is here that the "Chechia" witnesses the final stages of its manufacturing.