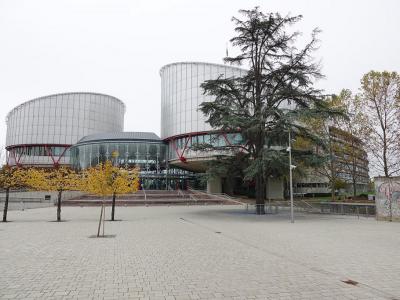 The court is housed in an ultra-modern building made of steel and glass and that uses natural light and ventilation in an effort to be planet friendly. The building is designed to be people friendly and inviting; from an aerial point of view it looks a little like a giant bug with two circular chambers like eyes on each side of the entrance hall, with myriad offices in the “tail” behind it.

It was designed by Sir Richard Rogers (London) and Claude Berger, a local architect. At its early stages the designs were enlarged to make a bigger building due to the fall of communism. The architects didn’t want the building to be a monument but rather a symbolic landmark and they certainly achieved their aim. There are four slabs from the Berlin Wall in front of the entrance.

The Court Room occupies one of the circular chambers that is 28000 square meters and has 342 seats all told. The Commission Room in the other chamber covers 520 square meters. There is a large Deliberating Room, a Projection Room, 420 offices and a cafeteria.
Image by Eugene Regis on Flickr under Creative Commons License.
Sight description based on wikipedia

Strasbourg, situated in the Alsace region of France, is a very popular tourist destination. Is famous for its great architecture. The city centre is classified as a World Heritage Site by UNESCO. Also you'll find here a lot of attractions meant for children. Check out the most interesting destinations for your children in this self-guided tour of Strasbourg.

Strasbourg is considered the daughter of the Rhine River. It is famous for its history, cathedrals, architecture and gastronomy. In this walking tour you will discover interesting historical sights. All attractions are located in the heart of Strasbourg and are easy to find.