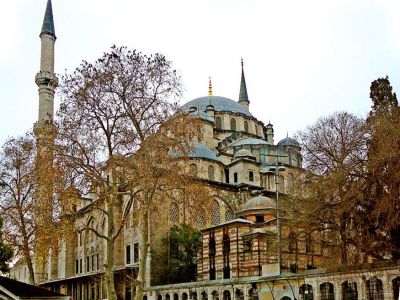 The Fatih Camii (“Conqueror’s Mosque”) is one of the largest examples of Turkish-Islamic architecture in Istanbul and was built over the original site of the Church of the Holy Apostles.

Constructed during 1462-1470 by Sultan Fatih Mehmet (Mehmet the Conqueror), the Fatih Mosque is rather distinct in structure. It consists of a hospital, a caravansary, kitchens, a marketplace and several hammams (Turkish baths). The mosque also houses a madrassah (Islamic school) which can accommodate over 1000 students.

The Sultan wanted to make a spectacular structure and when architect Atik Sinan was unable to create a mosque higher than the Avasofya (Hagia Sophia), the Sultan ordered both his hands cut off. Located atop the highest hill in Istanbul, the Fatih Mosque consists of a tall central dome, and semi-domes on all four sides.

An earthquake devastated the complex in 1771, upon which it went under major restoration by Mustafa III. From the original compound, only the inner courtyard, the madrassah (Islamic school) and the mihrab (prayer direction niche) have survived. The mosque’s interior has many depictions of Islamic Art. Outside the mihrab wall, the tombs of Sultan Mehmet II and his wife are found.

Why You Should Visit:
Maybe the best mosque to observe the culture & architecture of conservative Turks (you won't see many non-Muslim tourists).
Surrounded by numerous shops selling spices, sweets etc. (on Wednesdays there's a big open market, too).

Tip:
Make sure to take your shoes off and wear long trousers/skirts (ladies should bring a scarf).