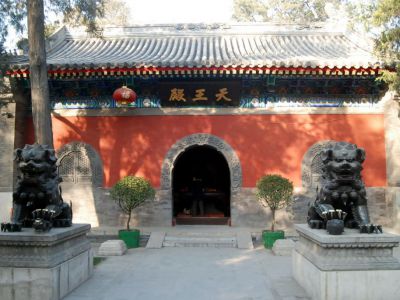 A trip to Beijing is incomplete without a visit to one of its oldest Buddhist temples Fayuan Temple. This temple is located to the Southwest of the city in Xuanwumen area. This temple was constructed in 645 by the second emperor of Tang Dynasty, Li Shimin, in memory of the soldiers and officers who lost their lives in battles. It was originally called the Temple in Memory of the Loyal (Minzhongsi).

Between 1436 and 1449, during Ming Dynasty’s Zhengtong period, the temple was rebuilt and named Chongfusi or Temple of Exalted Happiness. It was in 1734 that the temple got its present name.

Fayuan Temple is spread over 6,700 square meters. You will find a number of interesting cultural relics that include bronze sculptures and rare gilded figures of the three Buddhas namely the Puxian or Samantabadra, Wenshu or Majusri and Piluzhena or Vairochana. You will also find Davarajas or the Four Heavenly King bronze sculptures here.

In front of the Hall of Pure Karma, you will find a huge, decorated alms bowl that resembles the jade urn in Circular Wall in Beihai Park. Do not miss out Shang Shijin’s The Ode to the Pagoda at the Platform in Memory of the Loyal. This ode is written in Su Lingzhi’s calligraphy. You will also find exquisite stone pillars with Buddhist scriptures inscriptions on them, stone carvings and Ming and Qing dynasty plaques.
Image by Shizhao on Wikimedia under Creative Commons License.