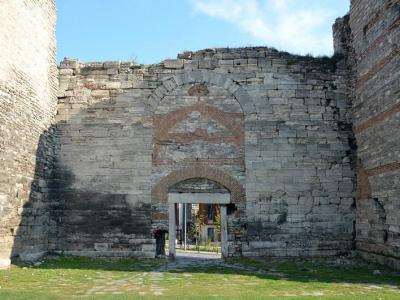 The Fifth Military Gate lies immediately to the north of the Lycus stream, between towers 77 and 78, and is named after the quarter of the Pempton ("the Fifth") around the Lycus. Heavily damaged, with extensive late Byzantine or Ottoman repairs evident, it is also called Hücum Kapısı ("Assault Gate") in Turkish, because here the decisive Turkish breakthrough was achieved on the morning of 29 May 1453.

Some earlier scholars identify this gate as the one mentioned in the texts on the final siege and fall of Constantinople. If this theory is correct, the last Byzantine emperor, Constantine XI, died in the vicinity of this gate during the final Ottoman assault. Support to this theory comes from the fact that the particular gate is located at a far weaker section of the walls than the "Cannon Gate", and the most desperate fighting naturally took place here.

Although the gate itself is absent, visitors can actually stand in the place where the Theodosian Wall was firstly breached in over a millennium.
Image Courtesy of Flickr and Carole Raddato.