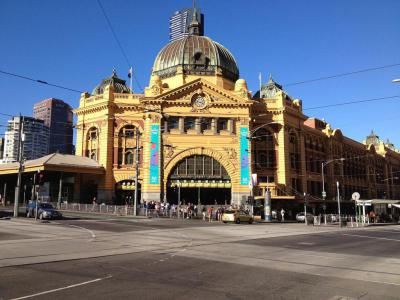 Flinders Street Station is one of Melbourne’s most recognized landmarks located on the corner of Flinders and Swanston Street in the CBD. The first train station on the Flinders Street site was established in 1854, but the building that you see today dates from 1905. The design of the station was chosen from entries in an architectural competition held in 1902. One of the main features of the building is the dome, which began construction in 1906 and the station was officially opened in 1910, two years after the projected date. Within the station, the 708-meter main train platform is the fourth longest in the world.

These days, the station itself is the busiest in the southern hemisphere with more than 100,000 commuters passing through it each day. It is also one of the city’s key meeting points, with local Melburnians meeting each other “under the clocks” at the building’s entrance. The 13 different clocks show the train times, but these days they are operated by computer. There are rumors that the plans for the Flinders Street Station and the Bombay Rail Station were mixed up at the architectural offices in London, but there is no concrete evidence to support the idea.

Why You Should Visit:
Even if you don't want to ride the train, this gorgeous big-city building and the delicious eating options make it worth a look.

Tip:
Makes for a good photo opportunity at night when it is lit up!