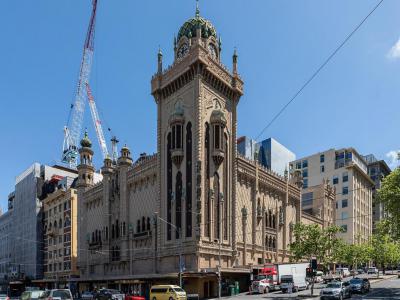 Melbourne has long been considered the cultural capital of Australia, and the Forum Theatre is one of the city’s best known cultural landmarks. Formerly known as the “State Theatre”, it was originally built as a movie palace. When the theatre opened in 1929, it had the largest seating capacity in the country with space for 3371 people. The building was designed by John Eberson, an American architect, who was well known around the world for his theatres. The exterior was in the Moorish revival style, with decadent minarets, cupola and an attention grabbing clock tower. The interior was done in an ornate Greco-Roman style and the ceiling was peppered with stars to emulate the twinkling night sky.

Today the theatre is no longer a cinema, but has for many years been used for a wide variety of theatrical, musical and cultural performances. Entertainers such as Oasis, Katy Perry and Ozzy Osborne have performed there and it is a regular venue for the Melbourne International Film Festival and Melbourne International Comedy Festival. The Forum Theatre has been on the Victorian Heritage Register since 1981.
Image Courtesy of Wikimedia and Dietmar Rabich.