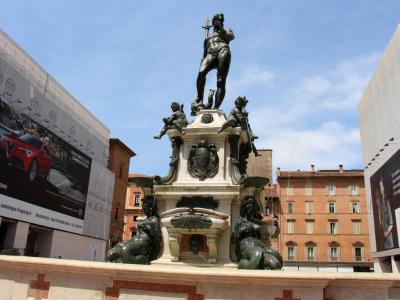 Fountain of Neptune, Bologna (must see)

The massive Fountain of Neptune, located in the Piazza Maggiore, was completed in 1563 by architect Tommaso Laureti. Cardinal Legate Charles Borromeo commissioned the fountain to commemorate Borromeo's uncle's election as Pope Pius V.

Artist Giambologna had submitted his design in a bid for the Florence's Fountain of Neptune; however, he lost the bid. Giambologna then used the design for Bologna's commemorative fountain.

A city block was demolished to make room for the impressive fountain. The base of the fountain is covered by marble from Verona. The fountain features Nereids, cherubs, and dolphins. The dolphins represent the major rivers known at the time: the Ganges, the Nile, the Amazon, and the Danube.

In the center of the scene is the magnificent Neptune, placating the seas. This symbolizes the new Pope ruling Bologna and the world.

The Fountain of Neptune is one of Bologna's most iconic landmarks. The Bologna-based Maserati brothers incorporated Neptune's trident into their now-famous car company logo.
Image Courtesy of Flickr and Fred Romero.