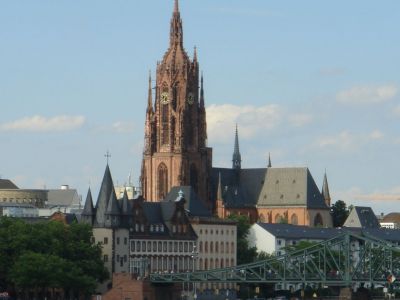 Frankfurt Cathedral is a Gothic-style Roman Catholic temple dedicated to Saint Bartholomew. It is the main and the largest religious sight in Frankfurt – the height of its spire reaches 95 meters. Despite the name, it has never been a true cathedral though, but is called so – Kaiserdom (Imperial Cathedral) or simply the Dom – for its importance as a former election and coronation church of the Holy Roman Empire.

The present building is the third church on this site. The early temple was constructed over a 7th-century Merovingian chapel in 1250. A Gothic tower was added in the 15th century. In 1356, Charles IV, Holy Roman Emperor issued the Golden Bull by which all emperors of the Holy Roman Empire were to be elected in this collegiate church as kings of Germany; from 1562 to 1792, all emperors-elect had been crowned here as well.

In 1867, St. Bartholomew's was destroyed by fire and rebuilt in its present style. During WWII, between October 1943 and March 1944, the Old Town of Frankfurt had been devastated by six bombardments of the Allied Air Forces. The cathedral also suffered severe damage; its interior burned out completely and was reconstructed only in the 1950s.

St. Bartholomew's houses many splendid works of art, including a unique high altar and the Maria Schlaf altar located in St. Mary’s chapel. Inside, there is an Anthony Van Dyke Painting, ‘The Lamentation’, and a museum with many historic pieces including objects discovered in a grave of a Merovingian girl.

Why You Should Visit:
Admission is free and, if lucky, you may enjoy some impressive organ music, or take in panoramic views of Frankfurt from atop the cathedral's tower (for a small fee).

Tip:
Try and go on a weekday to avoid weekend crowd; make sure to take a bottle of water if you decide to climb the tower.