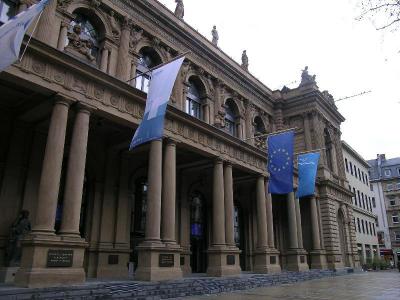 The Borse or the Frankfurt Stock Exchange is the third largest stock, share and foreign exchange market in the world. The present building located in the heart of the city was constructed in the early 19th century.

In the 9th century, the stock exchange in Frankfurt began with a free letter by Emperor Louis the German permitting the establishment of free trade fairs. The letter spurred a flurry of financial activity and by the 16th century, Frankfurt was a flourishing center for trade and financial services. The first Borse was formed in 1585 and in 1874 the stock exchange moved into its present location. The building housing the new Borse was designed by German architects, Rudolf Heinrich Burnitz and Oskar Sommer. The red sandstone structure had a neo renaissance style with an ornate Greco Roman facade. The elegant appearance of the Borse is further enhanced by the bronze sculptures of a bull and bear at the square in front of the building. The figures were cast by Sculptor Reinhard Dachlauer and placed at the location in 1988.

Floor trading is still conducted at the stock exchange and visitors can reserve a seat to view the proceedings. The visitor’s gallery is open for two hours on each trading day and assistance and interactive methods are used to give viewers a better understanding of the floor trading process.
Image by dontworry on Wikimedia under Creative Commons License.
Sight description based on wikipedia