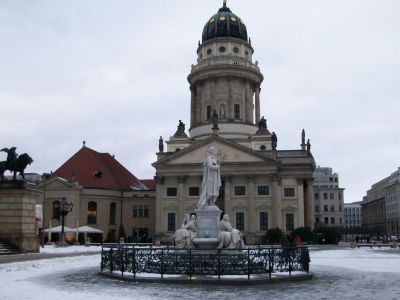 Französischer Dom (French Cathedral) is a colloquial name for the Französische Friedrichstadtkirche (French Church of Friedrichstadt) located in Gendarmenmarkt square of Berlin, opposite the Deutscher Dom (German Cathedral, named so for serving German-speaking congregants). Contrary to it, the French Church (or rather the first parts thereof), built from 1701 to 1705 by Louis Cayart and Abraham Quesnay, was designed to serve the French-speaking Huguenot (Calvinist) community of Berlin, which made up nearly 25% of the local population at the time.

The church was modeled on the destroyed Huguenot temple in Charenton-Saint-Maurice, France, and is not a cathedral in the strict sense of the word because it has never been the seat of a bishop. The domed tower, which is a viewing platform open to visitors, provides a panoramic vista of Berlin. In the basement, underneath the prayer hall, there is a restaurant. The tower also contains the Huguenot museum of Berlin.
Image by zahi on Wikimedia under Creative Commons License.
Sight description based on wikipedia