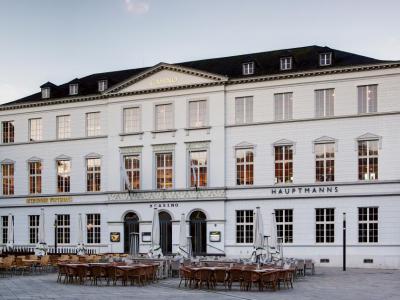 Französisches Casino, also known as the French Casino or Kasino Kornmarkt, is a classical building on Trier's Grain Market. It was built in 1825 by Johan Georg Wolff as a club house for the Trier Reading Society, founded in 1817. Members of the society included community leaders, the educated class and Prussian officers. Heinrich Marx, father of Karl Marx, was a prominent member of the Literary Casino Society.

It was at one of the Casino Society’s dancing balls where Karl Marx fell in love with the “Queen of the Ball”, Jenny von Westphalen. They were married in 1843 and moved to France the same year.

The building was heavily damaged during World War II in 1944. The only remaining components of the structure were the outer walls. It was rebuilt using the original design for its outer facade. The interior was fully remodeled, but an original spiral staircase was restored and put in place.

The building was restored after the World War II and served as a casino for the occupying French soldiers, which gave it its current name. It is now an event venue that serves as the location of cultural celebrations, parties, lectures, theatrical performances and concerts.
Image Courtesy of Wikimedia and Berthold Werner.