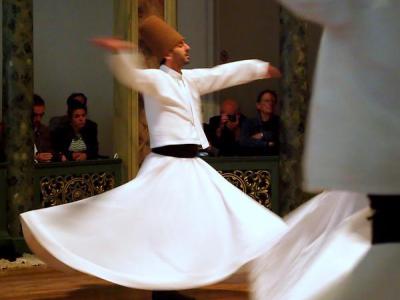 This former tekke (Whirling Dervish lodge) is both a museum and one of the few Istanbul venues to see an authentic Whirling Dervish performance. To get the most out of the experience, one should strongly consider visiting the museum before witnessing the performance, which takes place on Sundays at 5pm. Alternatively, one can freely wander around the beautiful, peaceful grounds, which features a small cemetery where former tekke members are interred.

The first thing to say about the Sema (Whirling Dervish) ceremony is that despite many of the audience being tourists, it is not some kind of tourist show thrown together purely for entertainment. The performance forms an integral part of a religious service, which one has to experience in its entirety to be able to put the whirling component into context and understand its significance. The ceremony builds from a near-silent, motionless beginning through several precise stages – each with its own importance and meaning – to the rhythmic movement that is known as whirling. Everything in the ceremony is laden with symbolism and is about transition, a representation of our journey through life and the desire to gain a meaningful understanding of our own existence.

Handout brochure explain the basics, seats are provided, and the whole thing takes around 50 minutes (be aware that this is an abbreviated version of the "real" ceremony that would take up to 3 hours). Come early if you want a full view seat – though standing and watching is also acceptable.

Tip:
Tickets for the museum are sold at a kiosk inside the grounds (walk in from the street, pass an information office on the right, keep going and you will see the kiosk on your right), while tickets for the Dervish ceremony are sold at a small table on the sidewalk in front of the main entrance to the museum, beginning from noon on Sunday.