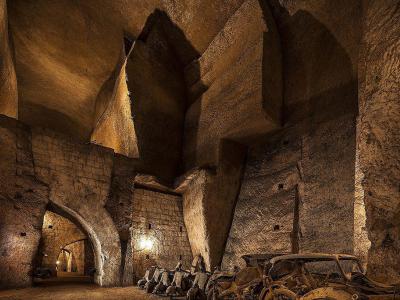 Visitors can find the Bourbon Tunnel 100 feet below the city of Naples. The tunnel was originally built in 1853 as an escape route for the Bourbon royal family.

King Ferdinand II of Bourbon commissioned the tunnel during a time of turmoil. Sicily and Naples were experiencing uprisings and riots, and the royal family wanted a way to escape the Royal Palace if needed.

The tunnel was connected to the 17th-century aqueduct system. Workers carved out the tunnel using hand tools such as picks, hammers, and wedges and used candlelight as illumination. Unfortunately, King Ferdinand II died before the tunnel was finished, and the underground space went unused until World War II.

During World War II, the space was used as an air-raid shelter and housed up to 10,000 Neapolitans.

After the war, the tunnel was used as a dump for wartime debris and impounded cars.

Today's visitors can see items left by wartime visitors, such as toys, hairbrushes, and beds. The impounded cars of the 1950s and 1960s are now classics and are an interesting addition to the underground tour.
Image by Associazione Culturale Borbonica Sotterranea on Wikimedia under Creative Commons License.