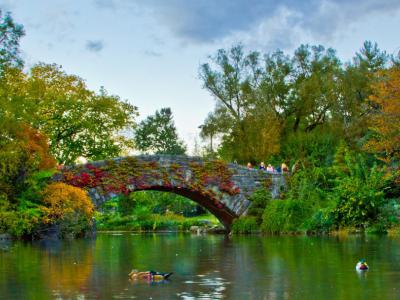 One of the first landmarks to discover after entering Central Park's southeast corner, the robust Gapstow Bridge just so happens to be among the best spots for photography within the Park as well, along with Bethesda Fountain and the Belvedere Castle. Although not far off from several similar bridges, this one wins for the commanding and breathtaking views it offers, with natural scenery on one side and Manhattan's skyline on the other.

Originally wooden and cast-iron, though for the last hundred-plus years made of stone, the bridge itself may not be an architectural marvel but has a beautiful aesthetic presence to it. It's apparently also quite popular with locals, who come to watch the ducks in the pond and relax after work.
Image Courtesy of Flickr and spurekar.