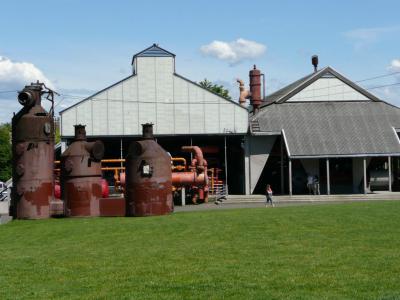 Hulking specters of a bygone age dominate Gas Works Park, situated on a southerly knob of land jutting into Lake Union and the front door to North Seattle. The Seattle Gas Light Company began to produce heating and lighting gas in this refinery on the 20-acre (8-hectare) knoll in 1906, fueling a rapidly growing city while earning a reputation as a filthy, foul-smelling killer of vegetation and wildlife. The plant closed its valves for good in 1956.

When the site was proposed as a park in the early 1960s, the city council hired landscape architect Richard Haag to create a lush, arboretum-type park. Instead, Haag submitted a plan incorporating much of the old gas plant. His design – with the rusting hulks of the gasworks in the middle of an undulating lawn – triumphed after a storm of controversy.

Kites fly high over the park's Grand Mound, a grassy hill built west of the park's core from abandoned industrial waste. Picnickers and joggers share the space along an incline, and at the crown, visitors admire a mosaic astrological sun and moon dial. The crest offers a great panorama of inner Seattle – Downtown, Queen Anne Hill, the Aurora Bridge to the west, and Capitol Hill to the east.

Why You Should Visit:
Good option if you're in Fremont and want to get a photo of Seattle proper – there's a big hill (called Grand Mound) you can stand on and get a decent view. The old gasworks itself is also rather picturesque, in a decaying industrial kind of way.

Tip:
Check for outdoor concerts or bring a kite and/or a picnic and enjoy some seriously phenomenal sunsets!
One thing to note, though: the park's hilly landscape isn't ideal for playing sports.