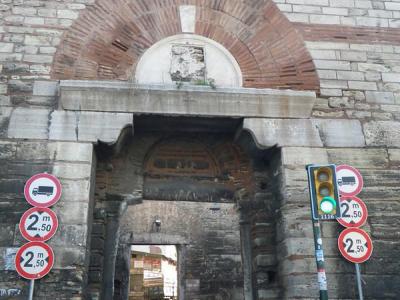 The best-preserved and one of the most intriguing gates of the Theodosian Walls, substantially retaining its original, 5th-century appearance, is the Gate of Rhesios named according to the 10th-century Suda lexicon after an ancient general of Greek Byzantium. In early modern texts it also referred to as the Gate of Rhegion (allegedly after the suburb of Rhegion, today's Küçükçekmece), or as the Gate of Rhousios, after the hippodrome faction of the Reds which was supposed to have taken part in its repair.

The gate stands out for the exceptionally large number of inscriptions preserved on its tower (at least six have been recorded), of which the most frequently cited is: "The Fortune of Constantine, Our God-Protected Despot, Triumphs..."
Image Courtesy of Flickr and todd.vision.