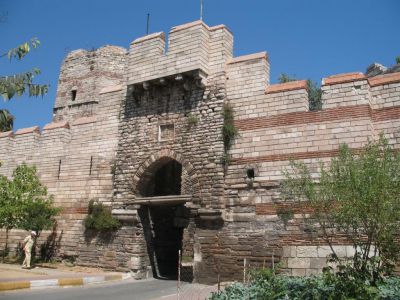 The Gate of the Spring or Pēgē Gate was named after a popular monastery outside the Walls, the Zōodochos Pēgē ("Life-giving Spring") in the modern suburb of Balıklı. It lies between the heptagonal towers 35 and 36, which were extensively rebuilt in later Byzantine times: its southern tower bears an inscription dated to 1439 commemorating repairs carried out under John VIII Palaiologos. In addition, in 1998 a subterranean basement with 4th/5th-century reliefs and tombs was discovered underneath the gate.

It was through this gate that, on 25 July 1261, the forces of the Empire of Nicaea, under General Alexios Strategopoulos, unexpectedly entered and retook the city, which had been the seat of the Latin Empire since its capture by the Fourth Crusade in 1204. Having learned from some independent local farmers that the entire Latin garrison, as well as the Venetian fleet, were absent conducting a raid against the Nicaean island of Daphnousia, Strategopoulos and his men attacked the walls from the inside, surprised the guards and opened the gate, giving the Nicaean force entry into the city. The Latins were taken completely unaware, and after a short struggle, the Nicaeans gained control of the land walls. Thanks to the timely arrival of the returning Venetian fleet, many of the Latins managed to evacuate to the Latin-held parts of Greece, but the city was lost for good. The recapture of Constantinople signaled the restoration of the Byzantine Empire, and on 15 August, Emperor Michael VIII entered the city in triumph and was crowned at the Hagia Sophia.
Image Courtesy of Wikimedia and CrniBombarder!!!.