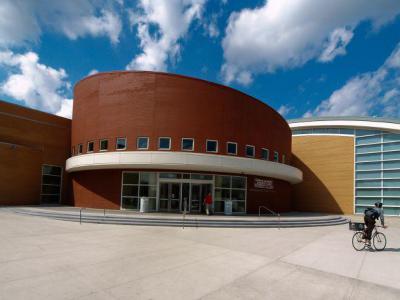 The Gerald Ratner Athletics Center is a $51 million athletics facility within the University of Chicago campus in the Hyde Park community area on the South Side of Chicago. The building was named after University of Chicago alumnus, Gerald Ratner. The architect of this suspension structure that is supported by masts, cables and counterweights was César Pelli, who is best known as the architect of the Petronas Towers.

The Ratner Athletics Center was approved for use in September 2003. The facility includes, among other things: a competition gymnasium, a multilevel fitness facility, an Olympic-sized swimming pool, a multipurpose dance studio, meeting room space, and athletic department offices. It serves as home to several of the university's athletic teams and has hosted numerous National Collegiate Athletic Association Division III regional and University Athletic Association conference championship events.

The Ratner Center has an award-winning design that substitutes a complex external mast and counterweight system for interior support devices to allow for large open-space areas inside the building. Cesar Pelli & Associates Inc. was credited as the design architect and OWP/P was the architect of record.
Image Courtesy of Wikimedia and Lee Bey.
Sight description based on Wikipedia.