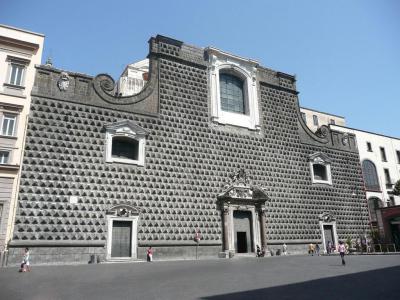 The Gesu Nuovo Church is managed by the Society of Jesus today and was initially built as a lavish residence. The unique exterior with diamond shaped stones has symbols believed to be a music score engraved upon them.

The Gesu Nuovo Church was built as the home of Roberto Sanseverino, Prince of Salerno in 1470. It was purchased by the Jesuits for 45,000 ducats in 1580 and turned into a church. Conversion of the building began in 1584 under the directions of renowned Jesuit architect, Giuseppe Valeriano and was completed in 1601. Although dedicated to Jesus and Mary of the Immaculate Conception, it has always been called the Gesu Nuovo Church.

The Gesu Nuovo Church is not only known for its unique exterior but also for its lavish interiors. It has the shape of a Greek cross with 11 chapels. The columns and altars are all covered with marble. Treasures inside the church are the fresco depicting the Expulsion of Heliodorus from the Temple by Francesco Solimena behind the façade and the frescoes depicting the life of the Virgin by Massimo Stanzione. The high altar was designed by F. Giuseppe Grossi was created by Neapolitan artists and covered with rare marbles, bronze and precious stones. Another treasure is the bas relief reproduction of Leonardo da Vinci’s Last Supper by Gennaro Calì.
Image by Heinz-Josef Lücking on Wikimedia under Creative Commons License.