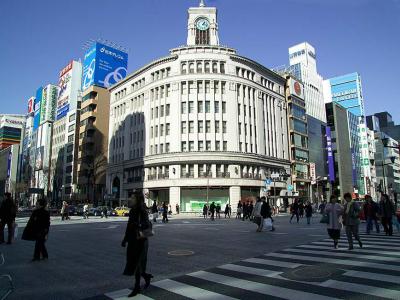 The Ginza Wako is a landmark building in Tokyo that was once the headquarters of the Seiko Watch Company. It is now a retail store selling upscale merchandise.

The Ginza Wako was established in 1881 by Kintaro Hattori the founder of the Hattori Watch Company that later became the Seiko Holdings Corporation. The Hattori Clock Tower stood in the location at the time. It was damaged by the 1923 Great Kanto Earthquake. The present building with a neoclassical style and a curved granite façade was designed by architect, Jin Watanabe. It was completed in 1932 and renamed as the K. Hattori Building. A clock was fitted in honor of Kintaro Hattori. Today, the clock tower plays the Westminister Chimes. The Ginza Wako was one of the few structures in the city left intact after the World War II bombings. The Allied occupation forces used it as their headquarters after the war.

Today, the Wako retail store sells watches, porcelain, women apparel and accessories, furnishings, jewelry, children’s apparel and expensive foreign chocolates. There are two restaurants, a tea salon, a chocolate salon, a gourmet and cake shop and a cafe within the building. It also has a large space for exhibitions where ceramic art exhibitions and other temporary events are held.
Image by Tokumeigakarinoaoshima on Wikimedia under Creative Commons License.