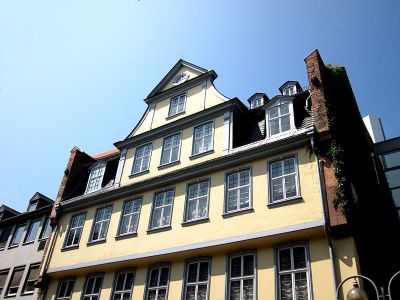 Grosser Hirschgraben 23 in Frankfurt is the place where philosopher-writer Johann Wolfgang Von Goethe was born and raised, and where he wrote his famous works: Götz von Berlichingen, Faust, and The Sorrows of Young Werther. The house was destroyed during World War II but was reconstructed with loving care to its 17th-century splendor, in memory of Frankfurt’s best-known son, by the local citizens.

The museum opened to the public in 1863 and has since remained a shrine for Goethe enthusiasts from all over the world. Decorated with period furniture and paintings, it provides an authentic environment in which Goethe spent his youth, reflecting the lifestyle enjoyed by affluent 17th century Germans, featuring various Baroque, Neoclassical and Rococo elements. Among the rooms painstakingly restored after the war are the library where Wolfgang Goethe’s father worked and looked out for the return of his son, and the portrayal of an authentic 17th century German Kitchen.

The puppet theater that Goethe treasured enough to make the focal point of his novel 'Wilhelm Meister's Apprenticeship' is also on view. One of the treasures within the house is a large classic clock on the 2nd floor that tells the time, date, lunar and solar year. The building houses Goethe’s father’s vast collection of art, including paintings by well-known Frankfurt artists. The adjacent Frankfurter Goethe Museum contains books, works of art and manuscripts all related, in some way or other, to Goethe.

Goethe House is open through the week and is free for children under 6. Visitors can request the help of volunteers to understand the significance of every Goethe-related object on display.

Why You Should Visit:
More than you'd normally expect; apart from the house itself (completely nice to see), you can visit a gallery (up the staircase) that is no smaller than some art museums you'd want to pay much to visit. Great value!

Tip:
Good to either take an audio guide or make sure to grab a pamphlet at the entrance in the relevant language.