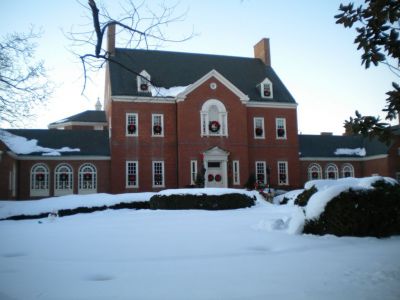 Adjacent to the Maryland State House complex, the official residence of Maryland's Governor, the Government House, also known as the Governor's Mansion, was built in 1870 to the design of Baltimore architect R. Snowden Andrews (1830–1903). Originally designed in the fashion of the Victorian time, with a mansard roof and Italianate arched windows, the mansion was converted to its present Georgian-style country house appearance in 1935–36. More renovations, including cleaning, painting, and roof repairs were done in 1947, followed by a new skylight installed by Maryland craftsmen in 1987, and a fountain, featuring Maryland symbols, placed in the garden in 1990.

The building features seven public rooms: the Entrance Hall, Federal Reception Room, Victorian Library, Empire Parlor, Conservatory, State Dining Room and the Drawing Room. In the Entrance Hall there are portraits of Queen Henrietta Maria, after whom Maryland was named, painted in 1901 by Florence MacKubin, and of Charles Calvert, the Fifth Lord Baltimore. A portrait of Frederick Douglass, commissioned in 2014 and painted by Simmie Knox, is on display in the Drawing Room, along the portrait of George Washington painted during the Revolutionary War by Charles Willson’s Peale, one of America's foremost portrait painters.

The State Dining Room features the portrait of the Sharpe Family, painted in 1753 and attributed to Arthur Devis. A portrait bust of Harriet Tubman, displayed on a wooden pedestal made from wood of Maryland’s historic Wye Oak, is displayed in the Conservatory. Among other treasures attesting to Maryland's rich and glorious past found here are the furnishings by Potthast, the eminent Baltimore furniture makers of the 19th century. The Victorian library now recalls the original ambiance of Government House, and panels and roundels from those doors can be seen here as well.

Visitors to the house used to enter through magnificent walnut doors, carved with the Maryland coat of arms and symbols of Maryland industry and agriculture. The list of important guests to the state, received in this house since the founding of the colony in 1634, includes some illustrious individuals, like Mark Twain, Her Royal Highness Queen Elizabeth, the Queen Mother, and Sugar Ray Leonard.
Image Courtesy of Wikimedia and Ostranox.
Sight description based on Wikipedia.