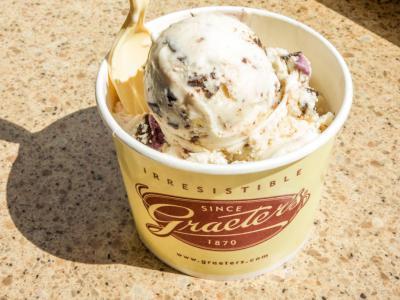 A trip to Cincinnati is incomplete without trying its popular local dessert, Graeter's Ice Cream.

Graeter, the son of German immigrants, opened the first ice cream shop for the business in 1870 in Cincinnati's Pendleton neighborhood which quickly gained a following. Growing with the advent of the premium ice cream market in the decades after, the company has been managed by four successive generations of the Graeter family, expanding its retail shops to Columbus, Louisville and other cities. Deals with major supermarket chains including Kroger have brought Graeter's Ice Cream to more than 6,200 grocery stores nationwide as well.

The ice cream maker is known for its "French pot" process that produces denser than average ice cream. Its national recognition for this ice cream grew over time, in particular after Oprah Winfrey declared it the best ice cream she had ever tasted in 2002. Vanity Fair recommended it as a holiday gift in 2005, calling it "one of the best homemade-ice-cream companies in the country."

Graeter's has been featured on shows on the Travel Channel, Food Network, Fine Living Channel, and History Channel.
Image Courtesy of Flickr and John Martinez Pavliga.
Sight description based on Wikipedia.

Want to visit this sight? Check out these Self-Guided Walking Tours in Cincinnati. Alternatively, you can download the mobile app "GPSmyCity: Walks in 1K+ Cities" from iTunes App Store or Google Play. The app turns your mobile device to a personal tour guide and it works offline, so no data plan is needed when traveling abroad.