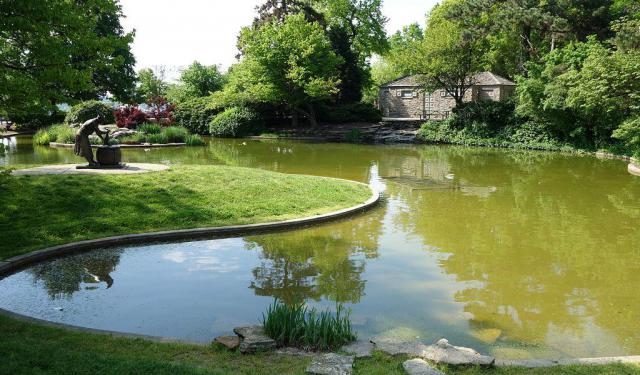 Eden Park is undoubtedly the most popular park in Cincinnati. This large outdoor area blends culture, history and architecture in one stunning location. Eden Park is home to a number of famous city landmarks, including the Cincinnati Art Museum, Park Water Tower, Krohn Conservatory and more. Take this self-guided walking tour to experience the most beautiful park in Cincinnati.
Image Courtesy of Wikimedia and Daderot.
How it works: Download the app "GPSmyCity: Walks in 1K+ Cities" from iTunes App Store or Google Play to your mobile phone or tablet. The app turns your mobile device into a personal tour guide and its built-in GPS navigation functions guide you from one tour stop to next. The app works offline, so no data plan is needed when traveling abroad.

Elsinore Arch was listed as a historic structure in the National Register on March 3, 1980. The arch, at Gilbert Avenue and Elsinore Place, was constructed in 1883. That year, the Cincinnati Water Works wanted to extend its efficient water supply main tunnel 185 feet to the line at Gilbert Avenue. The main tunnel started at the reservoir in Eden Park. To control the flow of water at the base of the steep hill, a valve house was needed. What resulted is a Norman Romanesque Revival mini-castle. The structure consists of a cylindrical castellated tower joined to a smaller square tower by an archway.
Image Courtesy of Flickr and Warren LeMay.
Sight description based on Wikipedia.
2

Image Courtesy of Flickr and Tony Alter.
Sight description based on Wikipedia.
3

4) Cincinnati Playhouse in the Park

The Cincinnati Playhouse in the Park was founded in 1959 by college student Gerald Covell and was one of the first regional theaters in the United States. Located in Eden Park, the first play that premiered at the Playhouse on October 10, 1960, was Meyer Levin's 'Compulsion'. The Playhouse has maintained a regional and national reputation in the theater community for bringing prominent plays to Cincinnati, as well as hosting national premieres such as Tennessee Williams' 'The Notebook of Trigorin' in 1996 and world premieres such as the Pulitzer Prize-nominated 'Coyote on a Fence' in 1998 and 'Ace' in 2006.

The Playhouse facility includes two theaters: the larger Robert S. Marx Theater and the smaller Thompson Theater. In addition to a full ten-month season of plays, the Playhouse also offers acting classes and programs for children.
Image Courtesy of Flickr and cincy Project.
Sight description based on Wikipedia.
5

Mirror Lake is a reflection pool located at 950 Eden Park Drive. The pool includes a fountain that shoots water 60 feet into the air. The fountain was a gift from the Meacham family in 1987. The lake and the surrounding area is a hive of activity throughout the year, with people walking, sailing, skating, ice skating and enjoying outdoor performances.
Image Courtesy of Wikimedia and Kevin.Daniels.
6

Eden Park is home to five memorial tree groves, the largest of which is Presidential Grove. Presidential Grove was established in 1882 when the first oak in memory of President George Washington was planted. This tree memorial includes a tree dedicated to every president of the United States.
Image Courtesy of Flickr and seamusiv.
7

Krohn Conservatory was completed in 1933 and named in honor of Irwin M. Krohn who served on the Board of Park Commissioners. It contains more than 3,500 plant species from all over the world, grouped into the following collections: the Bonsai Collection (a collection of bonsai trees from the conservatory itself), the Desert Garden (succulents and cacti), the Floral Display (home to six seasonal floral shows), the Orchid Display (approximately 75 blooming orchids at any time), the Palm House and the Tropical House (a large variety of ferns).
Image Courtesy of Wikimedia and Greg Hume.
Sight description based on Wikipedia.
8

Eden Park Water Tower stands 172 feet tall and was completed in 1894. It was designed by Samuel Hannaford and was used as a water tower until 1912. Today it serves as a communication tower, and it stands prominently in Eden Park. In 1971, the tower was listed as an American Water Landmark.
Image Courtesy of Flickr and Paul Sableman.