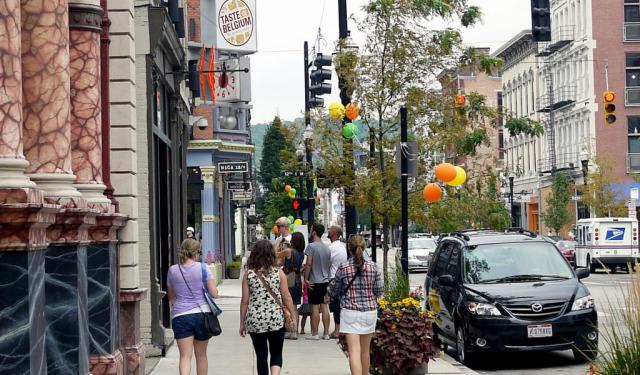 The historic Over-The-Rhine (OTR) neighborhood is one of the largest districts in the U.S. recognized by the National Register of Historic Places. Its name comes from the predominantly German immigrants who developed the area in the mid-19th century and had to commute across bridges over the Miami and Erie Canal (nicknamed "the Rhine" in reference to the river in Germany) which separated it from downtown Cincinnati. Thus the newly settled district north of the canal became known as "Over the Rhine".

The neighborhood currently undergoes strong development and revival, and is home to numerous craft breweries, hip gastropubs, and trendy bars. Still, if there’s one thing Over-the-Rhine is famous for, it is the finest in the U.S. concentration of well-preserved 19th-century Italianate architecture. One such edifice is the corner structure housing Taste of Belgium, one of the oldest surviving buildings in OTR.

Another local landmark – Washington Park – is popular for its fountains and festivals and is the second oldest park in the city, originally established as a burial ground for several small churches. In recent years, it has been the focal point of gentrification, prompting this portion of OTR to be renamed as "The Gateway Quarter".

The grand Music Hall – is likely Cincinnati’s most important and best-known building, representing a mixture of styles best described as Venetian Gothic. Constructed in 1878, this concert theater is the cornerstone of OTR’s renaissance and hosts the Cincinnati Opera, Cincinnati Symphony Orchestra, Cincinnati Pops Orchestra, and the Cincinnati May Festival.

Findlay Market – established in the 1850s, is the oldest continuously operated public market in Ohio. The emporium is also the site of special events, bustles with indoor specialty grocers and a weekend farmers’ market.

For a more detailed acquaintance with the Over-The-Rhine area of Cincinnati, take this self-guided walking tour.
Image Courtesy of Flickr and 5chw4r7z.
How it works: Download the app "GPSmyCity: Walks in 1K+ Cities" from iTunes App Store or Google Play to your mobile phone or tablet. The app turns your mobile device into a personal tour guide and its built-in GPS navigation functions guide you from one tour stop to next. The app works offline, so no data plan is needed when traveling abroad.

Washington Park is located east of the Cincinnati Music Hall, between Elm and Race streets. The park offers a playground with a castle and climbing wall, making it a good stop for tourists with young children.

Along with the standard slides and sandboxes, the park offers a splash pad that provides relief for children on hot days. There is also a dog park and a bandstand that hosts musical performances throughout the year.

One of the most noteworthy features of Washington Park is the American Classical Music Walk of Fame. Visitors to the park will see the names of Hall of Fame inductees engraved on pavement stones. The display has a dancing water fountain that plays along to classical music. Some of the inductees include Leonard Bernstein, Aaron Copland, Duke Ellington, Scott Joplin, John Williams and Beverly Sills.

Washington Park is open seven days per week from 6 AM through 11 PM.

The building was completed in 1878. It was designed by Samuel Hannaford in the Victorian Gothic Revival Architectural Style. It is distinctive from other performance halls in that the building is actually three separate buildings: Music Hall and the North and South Exposition Buildings.

The buildings feature sandstone carvings, a pitched gable roof and a large rose window. Music Hall originally had intricately carved brickwork, but most of the details were destroyed during a renovation of the building.

Those who enjoy sites that are reputed to be haunted should pay particular interest to Music Hall. It is said to be one of the most haunted places in America due to the fact that it was built over a pauper's cemetery.

Music Hall was named a National Historic Landmark in 1975. It has also been placed on the list of America's 11 most endangered historic places.
Image Courtesy of Wikimedia and Warren LeMay.
3

The Hamilton County Memorial Building, known by most as Memorial Hall, is a building created as a memorial to members of the military from Cincinnati and Hamilton County.

The building was funded by a cooperation between the Grand Army of the Republic and Hamilton County. In 1908, the two entities enlisted Samuel Hannaford & Sons to design the Beaux Arts-style memorial hall.

The hall hosts a 556-seat theatre that is used for concerts, events and ceremonies. Tourists can purchase tickets to see one of the many shows so they can get a glimpse of the hall's interior. With over 300 shows hosted each year, it is very easy to find a performance. Likewise, Memorial Hall attempts to offer as many low-cost or free performances as possible.

Many visitors forego the performances and simply enjoy viewing the columns and sculpted figures that adorn the exterior of the building. The location of Memorial Hall makes it an easy stop on a walking tour. It is in the Over-the-Rhine neighborhood, adjacent to Washington Park and south of Music Hall.
Image Courtesy of Wikimedia and Greg5030.
4

Taste of Belgium is a group of Belgian-inspired restaurants that are located throughout the city. Taste of Belgium OTR is the perfect spot to stop for Belgian cuisine while visiting Cincinnati's Over-the-Rhine neighborhood.

The menu features favorite items like beer cheese with homemade pretzels, Goetta hash and desserts made with Belgian chocolate. Breakfast and brunch are served all day, so those who want to ensure a plate of signature Belgian waffles won't be disappointed.

The restaurant offers a robust beverage menu. A number of Belgian beers and ales are offered alongside local drafts. Visitors can also try specialty cocktails like the Beer-Mosa or a Belgian Mule. Those who prefer non-alcoholic drinks can try a locally roasted Belgian coffee.

Ensemble Theatre of Cincinnati was founded in 1986. It is located in the Over-the-Rhine district about three blocks east of Washington Park. The theatre has 182 seats for intimate performances and a full-service bar.

Over-the-Rhine is a hip neighborhood full of arts, dining, restaurants and historic buildings. The Ensemble Theatre of Cincinnati stands out with its large columns and etched stone that offer a fusion of architectural styles.

The buildings now occupied by the Ensemble Theatre of Cincinnati were built in 1904 and 1912. The two buildings were originally a bank and a department store. Though they have been converted to theatre space, some of the early features remain in place. For instance, the bank vault walls and chimney flutes have been incorporated into the eclectic design.

Visitors can attend a show or simply stop by the Ensemble Theatre to admire architecture of days gone by.
Image Courtesy of Flickr and OZinOH.
6

A trip to Cincinnati is incomplete without trying its popular local dessert, Graeter's Ice Cream.

Graeter, the son of German immigrants, opened the first ice cream shop for the business in 1870 in Cincinnati's Pendleton neighborhood which quickly gained a following. Growing with the advent of the premium ice cream market in the decades after, the company has been managed by four successive generations of the Graeter family, expanding its retail shops to Columbus, Louisville and other cities. Deals with major supermarket chains including Kroger have brought Graeter's Ice Cream to more than 6,200 grocery stores nationwide as well.

The ice cream maker is known for its "French pot" process that produces denser than average ice cream. Its national recognition for this ice cream grew over time, in particular after Oprah Winfrey declared it the best ice cream she had ever tasted in 2002. Vanity Fair recommended it as a holiday gift in 2005, calling it "one of the best homemade-ice-cream companies in the country."

Graeter's has been featured on shows on the Travel Channel, Food Network, Fine Living Channel, and History Channel.
Image Courtesy of Flickr and John Martinez Pavliga.
Sight description based on Wikipedia.
7

Findlay Market is the oldest continually operated public market in the city. The original Findlay Market was founded in 1852. It was located on land owned by James and Jane Irwin Findlay. It has been named one of the top 10 public markets in the world by "Newsweek" magazine.

From March through December, a farmer's market opens at Findlay Market on weekends. Along with the regular vendors, the farmer's market features outdoor vendors and street performers.

Unlike many other public markets in the United States, Findlay market is open year-round. Visitors can shop from 10 AM to 4 PM on Sundays, from 8 AM to 6 PM on Saturdays and from 9 AM to 6 PM during weekdays. The market is closed on Mondays.
Image Courtesy of Flickr and Anthony G. Reyes.
8

Rhinegeist Brewery is a craft brewery located in Cincinatti's Over-the-Rhine neighborhood. The 25,000-square-foot brewery occupies what was once the Christian Moerlein Brewing Co. It is the second largest craft brewery in Ohio.

Rhinegeist was founded in 2005 by Bob Bonder and Bryant Goulding. They began by opening a brewery taproom, but were soon distributing to local bars. By 2014, Rhinegeist was bottling beers for wider distribution. One of their offerings, Rhinegeist's Truth IPA, was placed on a list of one of the best 100 beers in the world by "Men's Journal."

Visitors are welcome to sample beers and ciders in the taproom during open hours. The brewery also offers public tours that allow visitors to see the process of brewing beers and ciders from beginning to end.

Those who want more in-depth tours can book a private tasting tour, a specialty tasting tour or a historic tour that delves deeply into the days before prohibition when the Christian Moerlein Brewing Co. bottled its German beers in the same facility.
Image Courtesy of Flickr and Dave Lundy.