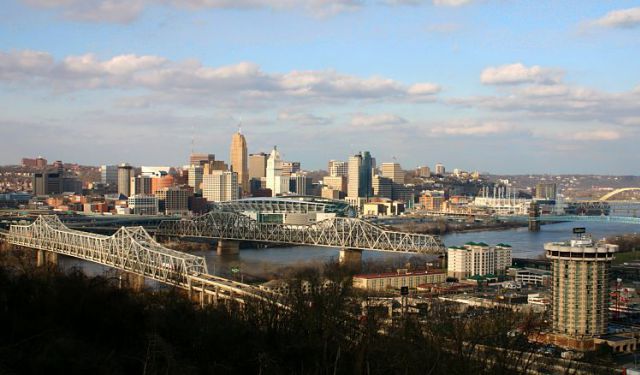 Image by Wing on Wikimedia under Creative Commons License.

Cincinnati is known as the first boom-town in U.S. and the first purely American inland city. The city boasts a top-notch zoo and aquarium, unique and walkable neighborhoods, a riverfront with clubs, shopping, and chili restaurants than any other city in the world. It also houses major sports teams including the Cincinnati Reds and the Cincinnati Bengals. Visit it and enjoy its blooming arts scene, including one of the largest collections of the 19th century Italian architecture in U.S.
How it works: Download the app "GPSmyCity: Walks in 1K+ Cities" from iTunes App Store or Google Play to your mobile phone or tablet. The app turns your mobile device into a personal tour guide and its built-in GPS navigation functions guide you from one tour stop to next. The app works offline, so no data plan is needed when traveling abroad.

Fountain Square has been the symbolic center of Cincinnati since 1871. The square, which replaced a butcher's market, was a gift from Henry Probasco in memory of Tyler Davidson. Probasco traveled to Munich and commissioned a bronze allegorical fountain from Ferdinand von Miller named The Genius of Water that symbolizes the uses of water, both natural and man-made. Originally, the square was a large island in the middle of 5th Street with buildings to the north and south, much like nearby Piatt Park. A 1971 renovation of the square included slightly moving and re-orienting the fountain to the west, and enlarging the plaza by removing the original westbound portion of 5th Street and demolishing buildings to the north. It is used for lunch-breaks, rallies, and other gatherings.

Fountain square has many events all through the week including speeches, games, movies, concerts, giveaways, and festivals. The square also has many seasonal events such as Halloween on the square, the ice rink, Octoberfest (largest outside of Germany) and more. To celebrate the 40th anniversary of Earth Day 2010, the square featured "EcoSculpt 2010", an exhibit of sustainable art. The exhibit included "Atlas Recycled" by Tom Tsuchiya, a sculpture made of used atlases that doubled as a recycling receptacle for plastic bottles and aluminum cans.

Image by Ryan Pflaum on Wikimedia under Creative Commons License.
Sight description based on wikipedia
2

Carew Tower is the second tallest building in Cincinnati. Completed in 1930, it stands 49 stories tall in the heart of downtown, overlooking the Ohio River waterfront, and is a National Historic Landmark. It contains the Hilton Cincinnati Netherland Plaza which is described as a fine example of French Art Deco architecture.. The hotel's Hall of Mirrors banquet room was inspired by the Hall of Mirrors at the Palace of Versailles. Hilton Cincinnati Netherland Plaza is a member of Historic Hotels of America, the official program of the National Trust for Historic Preservation.

The hotel was used as the model for the Empire State Building in New York City. Prior to the Great American Insurance Building, Carew Tower gave Cincinnati the distinction of having an American city's tallest building, constructed pre-World War II. It is named for Joseph T. Carew, proprietor of the Mabley & Carew department store chain, which had previously operated on the site since 1877.

Visitors can access the observation deck located on the 49th floor. On a clear day, visitors can see for miles in all directions, and three states (Kentucky, Indiana, Ohio).

Image by Warren LeMay on Wikimedia under Creative Commons License.
Sight description based on wikipedia
3

Lytle Park Historic District in downtown Cincinnati centers on Lytle Park. Described as an "urban oasis", Lytle Park is known for its large seasonal flower beds of tulips and chrysanthemums in entirely urban surroundings. In 1976, the buildings around the park were declared a historic district, and the resulting Lytle Park Historic District was listed on the National Register of Historic Places. The district includes examples of the Georgian, Greek Revival, and Italianate architectural styles, as it was an elite residential district from the early days of Cincinnati's history kept free of surrounding industry.

In 2014, Western & Southern Financial Group, owner of many properties within the Lytle Park Historic District asked the city to remove historic status of several historic buildings. The company hopes to demolish sections of the district in order to build new office space. The 11-foot (3.4 m) bronze statue of Abraham Lincoln facing the entrance of the park was commissioned by the Charles P. Taft family. The unusually beardless statue is the only public monument to an individual ever produced by sculptor George Grey Barnard.
Image by Nyttend on Wikimedia under Creative Commons License.
Sight description based on wikipedia
4

The John A. Roebling Suspension Bridge spans the Ohio River between Cincinnati, Ohio and Covington. When the first pedestrians crossed on December 1, 1866, it was the longest suspension bridge in the world at 1,057 feet (322 m) main span. Today, many pedestrians use the bridge to get between the arenas in Cincinnati (Paul Brown Stadium, Great American Ball Park, and U.S. Bank Arena) and the hotels, bars, restaurants, and parking lots in Northern Kentucky. The bar and restaurant district at the foot of the bridge on the Kentucky side is known as Roebling Point.

Ramps were constructed leading directly from the bridge to the Dixie Terminal building used for streetcars. These provided Covington-Cincinnati streetcars "with a grade separated route to the center of downtown, and the terminal building was originally intended to connect, via underground pedestrian passages, with the never-built Fountain Square Station of the infamous Cincinnati Subway." When streetcar service ceased in the 1950s the terminal was converted to use as a diesel bus terminal. The ramps were removed in 1998 when it ceased being used as a bus terminal.
Image by redlegsfan21 on Flickr under Creative Commons License.
Sight description based on wikipedia
7

Smale Riverfront Park spans over 40 acres (160,000 m2) of land along the Ohio River. It is named after John G. Smale, who gave $20 million for its construction in memory of his wife, Phyllis W. Smale.

The park connects Bicentennial Commons and Sawyer Point to form an almost 3-mile (5 km) corridor of public park along the river.

Additionally, the park contains a historical marker indicating the position of home plate of the former Riverfront Stadium. The area occupied by the Banks and the Riverfront Park is the former site of this storied facility, razed in 2002 after the completion of Great American Ball Park to the east.
Image by LouisvilleUSACE on Wikimedia under Creative Commons License.
Sight description based on wikipedia
8

The Cincinnati Riverwalk is also called the Ohio River Trail, it's several miles long and winds along the river in both Cincinnati and Kentucky. It's a great place for both locals and visitors to experience the city and get a taste for its history, beauty, and charm.

The easy-to-follow path keeps you right along the river and is ideal for families, walkers, runners, and anyone looking for a relaxing time outdoors. Enjoy the Riverwalk in small chunks or spend a few hours strolling along.