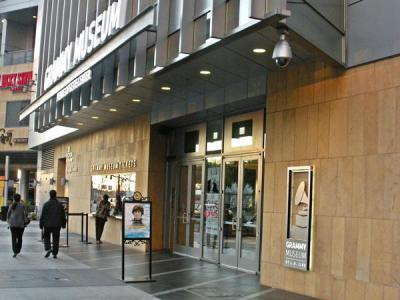 Devoted to the history and winners of the Grammy Awards, this museum has interactive touch-screens, videos, recording booths, and a rich collection of historical music artifacts – including costumes and instruments from the Grammy ceremony, along with hand-written lyrics, records, and audio/video recordings.

With exhibits that include behind-the-scenes live performances, seminars, classes, musician meet-and-greets, and interactive recording booths, the museum starts on the 4th floor and continues down to the 3rd and 2nd floors. The Crossroads exhibit, on the 4th floor, features touch-screens to view photos and listen to music of all genres. Another interactive exhibit allows the user to go inside six different sound-proof recording booths as famous performers and producers teach about different stages of producing commercial soundtracks. Visitors can record their own singing and rapping track, and remix it to produce a cover of various pop songs. The museum also has outfits worn by Grammy-Award-winning musicians such as Kanye West, Jennifer Lopez, and Rihanna.

First opened in December 2008 to mark the Grammy Awards' 50th anniversary, the museum has since presented over 300 public programs including educational programs for young students. It regularly updates and displays special exhibits dedicated to iconic names of music industry. Among these are The Beatles, Elvis, Whitney Houston, Michael Jackson, Barbara Streisand and other grand performers.