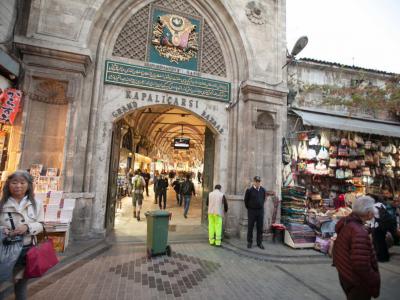 One of the oldest markets in the world, the Grand Bazaar of Istanbul or the Kapalicarsi (“covered bazaar”) has more than 58 covered streets and more than 4,000 shops. Anywhere from a quarter to half a million visitors come here daily.

The Grand Bazaar was built from 1455 to 1461 and has been open ever since. It is famed for its exquisite Turkish jewelry, silver decoration pieces, spices, Turkish delights (famous Turkish sweets), pottery and carpet shops. Visitors can also find leather goods, gold and diamond jewelry, as well as clothing here in rich supply.

The bazaar is particularly famous for the “Turkish Evil Eye” – an amulet made of blue and white glass believed to ward off evil spirits. Almost every street here has an “evil eye” stall, with many variations of the amulet being sold to tourists.

Originally the bazaar contained bedestens, which are domed structures used for storage, and was enlarged during the 16th century. After a major earthquake in 1894, the bazaar went under major restoration. Today, it contains two hammams (Turkish baths), two mosques, four fountains, as well as many cafes and restaurants.

Why You Should Visit:
The bazaar's centuries-old history can still be seen from the countless frescoes on the many ceiling arches and ancient columns; however, the main charm lies in its chaotic organization. Every turn is full of unexpected surprises – you will never know what you're going to find! No purchase is necessary to join this festivity.

Tip:
If you are in need of Turkish Lira cash, this is an excellent place to exchange.
Be prepared to walk away if the seller does not agree with your asking price (or watch what happens next!).