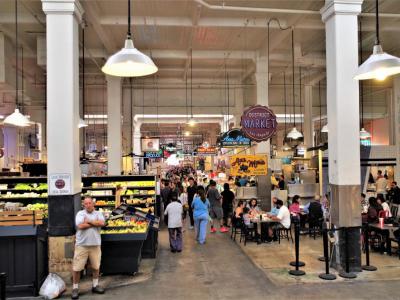 Grand Central Market (GCM as the regulars call it) is a Downtown LA landmark; a rare place which serves both as a watering hole for locals and as an authentic piece of LA architecture history for tourists. Opened in 1917 and now over a century old, it has been continuously in operation right through this time – that's some record!

GCM's stated mission is lofty: "to celebrate the cuisines and cultures of Los Angeles … to preserve the legacy of a historic downtown landmark … to gather the city's many communities around a shared table" – and it does a very decent job of all that, across 30,000 sq ft that encompass a food emporium and a retail marketplace.

History records that the building housing the market was commissioned by retired Ohio entrepreneur Homer Laughlin and was the city's first fireproofed, steel-reinforced structure. Originally built in the Beaux Arts style, it underwent subsequent modifications that drastically changed its appearance, including the addition of a tile façade in the 1960s which hid the second-story windows. Along with the adjacent Million Dollar Theater Building, it then underwent a major renovation in the 1990s in the course of which residential units were added, creating DTLA's first true mixed-use developments in decades.

Why You Should Visit:
Amongst the well-known names at GCM are McConnell's Fine Ice Cream, Belcampo, Roast-To-Go, Eggslut, Sarita's Pupusaria, Horse Thief BBQ, and Wexler's Deli.