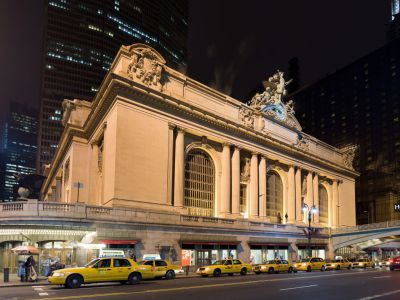 With 44 platforms and 67 railway tracks on two levels, the Grand Central Terminal is the largest train station in the world. It opened to the public in 1871, as part of the New York Central Railroad, when long-distance passenger trains were the most popular mode of transportation in the U.S.

The station was remodeled in 1913 upon which it got its current name, Grand Central Terminal. The ornate building features Beaux-Arts style with Corinthian columns and grand staircases. The ceiling on the top level has a beautiful blue fresco decorated with gold constellations by French artist, Paul Hellou. The lower level has a restaurant, called the Oyster Bar, which has vaulted ceilings with terracotta Gustavino tiles that form the support for the vaults.

In 1994, Grand Central Terminal was remodeled again – with lower ceilings and space for a retail mall and food court. It is now not only a transportation hub, but also an important tourist destination in New York City.

Why You Should Visit:
A great attraction to visit when the weather is wet, as it is mostly indoors. Awesome in size and lots of interesting details to look at.
Loads of eateries and quaint shops to check out between the commutes and trains.

Tip:
Oyster Bar on the lower level offers a huge selection of oysters and other seafood.
Don't forget to visit the Whispering Gallery just outside the Oyster Bar. Stand in opposite corners and you can clearly hear the opponent. Quite fun!