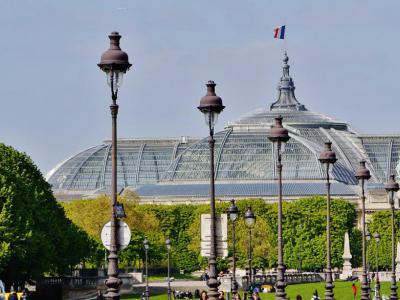 The Grand Palace and its sister, the Small Palace, just across the street, were conceived simultaneously as centerpieces for the 1900 World Fair in Paris. In that, the former palace was to accommodate fine arts, comprising various “salons” showcasing the artistic life of the French capital. Masterminded by four different architects, the palace took the form of an enormous glass-iron pavilion quite suitable for exhibiting sculpture and paintings. Curiously enough, the facility also suits for and, in fact, regularly hosts... horse shows!

Its façade is a typical example of Beaux-Arts architecture and is dominated by an enormous 8-tonne Art Nouveau glass roof, the largest in Europe. Reportedly, its construction took more steel than the entire Eiffel Tower. When the night falls and the lights go up, the play of light on the pillars, columns, scrolls and roof glazing produces a magical sight that leaves no one indifferent.

Inside, there are three major sections, namely: the Main Hall, the National Galleries, and the Palace of Discovery, which is the museum and cultural center dedicated to science. The Main Hall is undeniably festive and, although heavily criticized by its contemporaries initially, it is now widely admired. Quite spacious, the Main Hall is usually partially closed and gets fully open for special events only.

But the museum and the exhibition section are open all the time and are very well laid out and interesting on their own. There are several exhibitions and art fairs underway there perpetually, each of which has its own separate entrance. Also, on the premises, there is a cinema theater, a restaurant and, seasonally, even a skate rink.

Tip:
Should you decide to visit, don’t miss the Petit Palais just across the street while you're there, too!