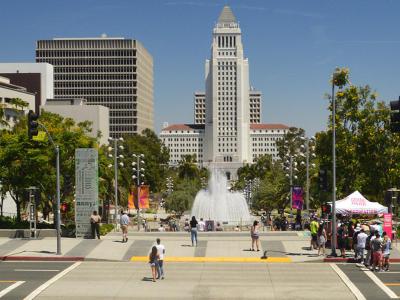 Stretching for 12 acres (4.9 ha) between the Los Angeles City Hall and Grand Avenue, LA's Grand Park, albeit size-wise paling in comparison to other well-established urban parks (such as those in Boston or NYC), compensates it with being part of one of the most architecturally stunning community places in the U.S., with dozens of buildings cascading downhill to create a majestic, almost Roman sense of design and continuity. From the sleek lines of the Water and Power building through the Music Center Plaza through Grand Park to the "Modern American" City Hall, the power, the beauty, the history, and the future of Los Angeles are masterfully represented here.

First proposed as a park by landscape architect Charles Mulford Robinson in 1907, inspired by the City Beautiful movement, it took several years of proposing the clustering of Los Angeles County government buildings in one place before the city finally accomplished the goal and a centralized park came into being in 1957. It was finally completed, as "Civic Center Mall", in 1966 with plazas, fountains and a Court of Flags.

Today, gated off and safe to roam, the park features tree-shaded sidewalks, a tropical greenhouse, a radiant colorful water fountain, performance lawns and courtyards, along with restrooms and kiosks to encourage walking and exploration. In addition to beautiful scenic photo opportunities, it is known for seasonal social events, such as summer dancing and movie screenings, fitness boot camps in the summer, plant sales, Día de Muertos displays, concerts, holiday décor, and, of course, the New Year's Eve countdown. And the best of everything is that most – if not all – events are free.

Park programming and entertainment, security and upkeep are maintained by the nearby Los Angeles Music Center. Designed to be pedestrian friendly, the park connects Bunker Hill to the civic center.
Image Courtesy of Flickr and Daniel Orth.