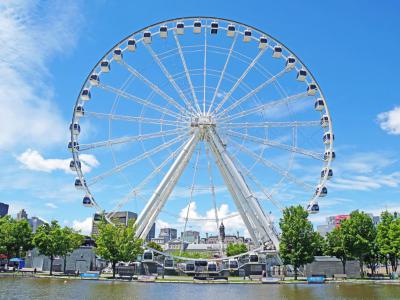 Situated directly on the river, on a sort of "mini-island" at the port, the wheel offers good 360-degree views of the city, including Old Montreal, its historic buildings, Place Jacques-Cartier, and the architecture of Downtown Montreal with Mont Royal as the backdrop, while the St-Lawrence River and its seaway unfolds to the south. There is plenty to see and do in the immediate area, too, so you can definitely make a morning, afternoon, or night of your visit.

Fitted with climate-controlled cabins, La Grande Roue is open year-round, day and night, rain or shine. A small park surrounds it with modern and clean facilities including a restaurant, cafe and ice cream parlor, gift shop, and restrooms. Packages are available for families, those wanting VIP rides, yearly passes, and more. You do not have to book or reserve a time in advance – just show up and pay. Certainly not a bad addition to an Old Montreal itinerary!